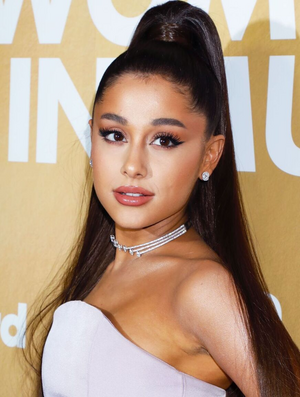 Ariana Grande-Butera (born June 26, 1993) is an American singer and actor. She first gained mainstream recognition for her roles in Victorious, 13 and the Victorious/iCarly Spin-Off Sam & Cat and since 2014 for constant appearances in the pop charts (to the degree where some people are actually surprised she started as an actor).

channel, where she showed off her musical talent, a Twitter

. She used to do a UStream

every Friday, but had to stop during 2013 (some fans snarkily suggested that this was because she had a bad habit of accidentally revealing her phone number during said streams).

Ariana's half-brother Frankie Grande was a houseguest on the sixteenth season of the US Big Brother. Ariana herself returned to TV in 2015 with Ryan Murphy's Scream Queens, and in December 2016 she played Penny on NBC's live presentation of Hairspray. She returned to film acting with 2021’s Don’t Look Up.

She is also the first person to be made an honorary citizen of the city of Manchester in 2017, in recognition of her fundraising efforts following the infamous terrorist bombing

which occurred at one of her concerts in the city. In the spring of 2021, she married real estate broker Dalton Gomez.