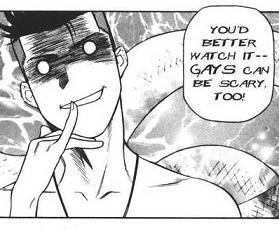 Sandy: I have a question: Are you single?
Dustin: I-I'm not gay.
Sandy: I don't care. You're hunky, and I am what they call "predatory gay"...
— Glee
Advertisement:

The Spear Counterpart of the Psycho Lesbian, and the monosexual counterpart to the Depraved Bisexual. Usually a villainous take on the Camp Gay or, on the other end of the spectrum, a Manly Gay sexual predator whose preferred "quarry" are straight men or young, naive Twinks. His motive is usually either his depraved sexuality or an unrequited love, like his Psycho Lesbian sister. If he's not explicitly gay, but it wouldn't be surprising, he's a Sissy Villain.

Please note that a villain simply being gay is not enough for this trope to be in effect. His brand of evil must involve a sexual nature and/or some uncomfortable flirting. Or even better, outright threats of rape/molestation. Before adding an example, think of whether he'd be any different if he wasn't gay.

On the other hand, for some people it is enough. For decades, this was the only role gays could play in mainstream media, and it still crops up uncomfortably often. Frequently the villain will be the only homosexual in the story. Now there will be a Freudian Excuse or they be played sympathetically - a kind of Author's Saving Throw against criticism.

Unsurprisingly, this kind of character is a staple of jail settings, where his predatory ways are often enough to make anyone uneasy around him.

See also Sissy Villain which is closely connected to this trope, and Double Standard: Rape, Male on Male which is at best only a threat, at worst the outright goal and M.O. of the predatory Manly Gay variation of this trope.