Film / Stranger by the Lake 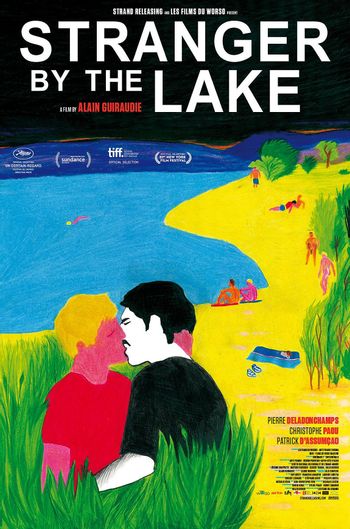 Stranger by the Lake (French: "L'inconnu du lac") is a 2013 French film written and directed by Alain Guiraudie, focusing on a group of gay men who meet at a cruising nudist beach next to a lake somewhere in France.

Franck (Pierre Deladonchamps) is in love with Michel (Christophe Paou) who is sleeping with most of the men at the beach. Franck desires Michel - even when he witnesses Michel drowning his lover in the lake one night. When the body resurfaces, Frank (who by now is having frequent sex with Michel) must decide whether to live out his passion, whilst Inspecteur Damroder (Jérôme Chappatte) tries to investigate the murder despite everyone on the beach closing ranks and saying nothing. Meanwhile, Henri (Patrick d'Assumçao), a newcomer to the beach, must deal with his feelings towards Franck.

Tropes by the Lake: