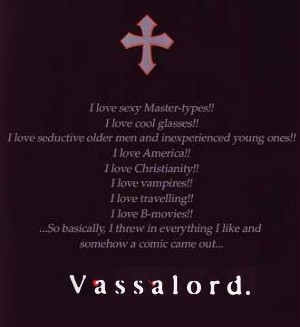 When a Love Freak starts Playing To The Fetishes
Advertisement:

A Josei manga by Nanae Chrono about a cyborg vampire named Charley who happens to be a vampire hunter for the Vatican. No, really. Since it's a sin to ingest the blood of a human, Charley lives off his master, playboy Johnny Rayflo, also a vampire. Cue Unresolved Sexual Tension and buckets of Ho Yay. The first four volumes are available in English from the now-closed Tokyopop. The entire series consisted of seven volumes and ended on March 15th, 2013.

A few drama CD's have been released, and an OVA was produced and released along with Volume 7.