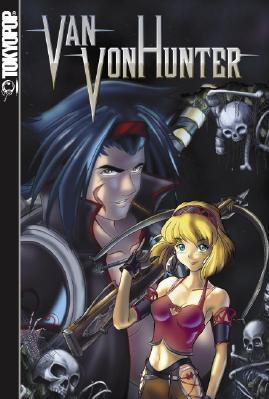 wanders around with his Sidekick and fights evil. Or at least as much evil as friendly vampires and The Flaming Prince can summon.

Basically a comedic fantasy, Van Von Hunter pokes fun at many fantasy elements, especially the questing aspects and the kind of people who make those requests. Its sense of humor is its strong point.

It started in 2002, but started suffering from Schedule Slip sometime after the author got a book deal from Tokyopop. Three volumes were published in all, forming a complete story arc taking place ten thousand three years after the end of the story begun in the webcomic. It also made a surprising jump to newspaper syndication, thanks to a six-month deal through Universal Press Syndicate. The webcomic started up again in 2012 with some strips involving Time Travel.

Has also been turned into a movie, which...diverges from the source material.