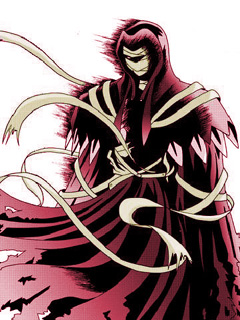 This cloak gives the wearer an instant +5 modifier for Intimidation.
Advertisement:

Like the Badass Longcoat in modern settings, a character who wears a long robe in a fantasy setting will invariably be Badass. Like the Badass Cape, this can be used to dramatic effect by billowing in the wind, but it also has the advantage of being potentially All Encompassing to add an air of mystery. Plus, it looks good with a hood. Expect many monks to be this.

Dramatic Wind aside, in a Fight Scene, a battle can be made so much easier if your movements are being concealed (foot-work, on-coming punches, etc.). Also, there's a sadistic joy to be taken from unnerving an enemy who can't see the damage he does nor the point he's aiming at. Suffice it to say, a person in a robe is an enigma both in battle and outside of it.

As per Rule of Cool, this can be used to produce many impressive visual effects: anytime this character jumps (usually from a great height), they'll appear to have wings; when the character spins, they'll take on the look of a violently twisting spiral; when they dash or rush forward, they look like a human bullet.

If martial arts are involved, odds are good that the robe will have Dragons Up the Yin Yang.

Compare with Robe and Wizard Hat which is often more oriented to magic-users and Black Cloak which is generally worn by evil characters.