Film / The Lord of the Rings 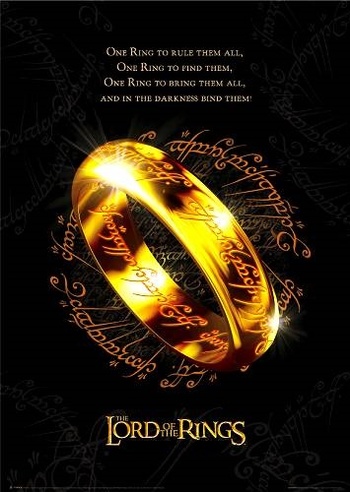 "The Ring was made in the fires of Mount Doom. Only there can it be unmade. It must be taken deep into Mordor and cast back into the fiery chasm from whence it came!"
"It began with the forging of the Great Rings. Three were given to the Elves; immortal, wisest and fairest of all beings. Seven to the Dwarf Lords, great miners and craftsmen of the mountain halls. And nine. Nine Rings were gifted to the Race of Men, who above all else desire power. For within these Rings was bound the strength and will to govern each race. But they were all of them deceived...for another Ring was made. In the land of Mordor, in the fires of Mount Doom, the Dark Lord Sauron forged, in secret, a Master Ring to control all others. And into this Ring, he poured his cruelty, his malice, and his will to dominate all life. One Ring to rule them all."
— Galadriel
Advertisement:

An adaptation of J. R. R. Tolkien's The Lord of the Rings into a film trilogy directed by Peter Jackson. The movies were filmed together and released one year after the previous for the holiday seasons 2001-2003.

One of the most ambitious movie projects ever undertaken, the overall budget was around $300 million (estimates vary between $281-330 million) and principal filming for all three pictures took place over 18 months in Jackson's native New Zealand (which has seen tourism increase by 50% since the films came out). The entire project took eight years, factoring in the early pre-production and the fact that additional pick-ups were filmed in between each film's release. In fact, the very last shot filmed (a few skulls tumbling along the ground) was quickly shot in the studio after the third film was released and included in the extended edition.

The theatrical versions were lengthy epics (all clocking around at 3-ish hours), and the "Extended Editions" (released before the succeeding movies) added at least another half-hour to each film's running time.note Around 12 minutes of that extra run time is credits added for the fan community website. Unusual for such a thing, Peter Jackson has stated that the Extended Editions are not an actual Director's Cut (feeling the term would unfairly imply that he was unsatisfied with the theatrical releases) but merely a fan-friendly extension to enlarge the world of Middle-earth and see what things they left out of the faster-paced theatrical versions. The results were astonishingly critically and commercially successful, with each film grossing more than $750 million (averaging more than $1 billion after being adjusted for inflation), and with all three winning Oscars.note Fellowship won 4, Two Towers won 2, and Return of the King won 11 — it shares the record for most Oscar wins for a single film ever with Ben-Hur (1959) and Titanic (1997), and holds the record for the biggest 'sweep', winning all the awards it was nominated for.

An adaptation of The Hobbit was later made into a prequel trilogy, with Peter Jackson returning to direct the films. The first part of which was released in winter 2012 and the last in winter 2014. Many actors (such as Ian Mckellen, Andy Serkis, Cate Blanchett, Hugo Weaving, Orlando Bloom, and Christopher Lee) from the Lord of the Rings trilogy returned to reprise their roles.

The Prime Video series The Lord of the Rings: The Rings of Power about the Second Age is not in the continuity of the film series, although New Line Cinema is involved in the production in some capacity.

Lord of the Rings: The Fellowship of the Ring opens with Galadriel narrating the forging of the twenty Great Rings, including the One Ring which Sauron forged for himself to control the other ringbearers, as well as Middle-earth's resistance against the dark lord.

Lord of the Rings: The Fellowship of the Ring opens with Galadriel narrating the forging of the twenty Great Rings, including the One Ring which Sauron forged for himself to control the other ringbearers, as well as Middle-earth's resistance against the dark lord.