Tear Jerker / The Lord of the Rings 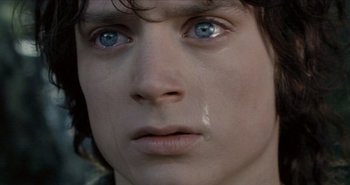 "I wish the ring had never come to me. I wish none of this had happened."note "So do all who live to see such times, but that is not for them to decide: all you have to decide is what to do with the time that is given to you."
"I will not say: do not weep; for not all tears are an evil."
— Gandalf, summing everything about this page.

open/close all folders
Tearjerker in Tolkien's The Lord of the Rings
". There's a reason why that chapter is called "Farewell to Lórien" and why this quote adorns the End of an Age page:

On the green bank near to the very point of the Tongue the Lady Galadriel stood alone and silent. As they passed her they turned and their eyes watched her slowly floating away from them. For so it seemed to them: Lórien was slipping backward, like a bright ship masted with enchanted trees, sailing on to forgotten shores, while they sat helpless upon the margin of the grey and leafless world.
O Lórien! The Winter comes, the bare and leafless Day;/ The leaves are falling in the stream, the river flows away./ O Lórien! Too long I have dwelt upon this Hither Shore/ And in a fading crown have twined the golden elanor./ But if of ships I now should sing, what ship would come to me,/ What ship would bear me ever back across so wide a Sea?