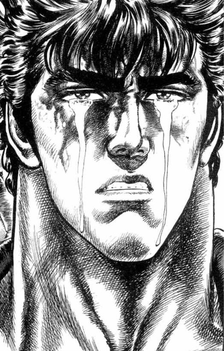 Crying is a very powerful expression of human emotion. But not all cultures and times understand the symbolism of crying in the same way. Particularly variable is the degree to which this symbolism has been gendered over the centuries.

Boys don't cry. It doesn't matter the circumstances; shedding any tears is the ultimate no-no in terms of what you can and can't do as a man. But sometimes... sometimes... sometimes there comes a time when a man's emotions deny any other form of expression, and they pour forth—prerequisite impassioned speech may or may not be present—by cascading down his cheeks. And crying does NOT make him any less badass in the eyes of the audience, but in fact may even reinforce this status. In other words, Manly Man-Tears Of Manliness.

Common cases of this are:

The common thread here is that Manly Tears are justified and dignified. Crying for no (good) reason doesn't count, nor does crying out of frustration or over wounded pride. Pain is out too, for no matter how bone-shattering the beating or how excruciating the torture The Hero will never give their tormenter the satisfaction of MANPAIN TEARSnote  this being where Berserker Tears come in handy, as per the "don't get scared, get angry" maxim. Crying in fear is also out, for the same reasons. On the "dignity" side, however justified they might be, Inelegant Blubbering generally doesn't qualify as Manly Tears because of their lesser/non-existent dignity- though depending on the situation and the person, the two can overlap on very rare occasions: There are some things which can move even the most stoic Badass to openly weep.

This can also be a common audience response to particularly emotional moments in the more Hot-Blooded shows. In this case, it often overlaps with Tears of Joy.

If the character is particularly sensitive and so is often moved deeply, see Tender Tears or Emotional Bruiser.

Manly Tears may swiftly change into Berserker Tears if the one who caused the hero's suffering is here.

Sometimes the tears may be Tears of Joy, and paired with the Fist Pump.

Contemptible characters may attempt to characterize these tears as water works; the effect is to make them even more contemptible. The crying character may also apologize for them as a sign of weakness. True friends will probably reassure them It's Okay to Cry.

Contrast Sand In My Eyes, where the man denies to the end that he is crying. See also Not So Stoic and Break the Badass. May be in the form of a Single Tear (which generally makes it even manlier)

Since there is no separate trope covering works from cultures where crying is actively expected as a part of masculinity, or no big deal, examples of that are included here. But in such cultures the message of the symbolism is not "he's crying because it's so extreme that even a normally unemotional man would cry", but rather "he's crying because a display of authentic emotion is what is expected of a man in these circumstances".

Statler: Well, you know what they say; it takes a big man to cry.
Waldorf: Yes, indeed. But it takes an even bigger man to laugh at that man.
Both: Do-ho-ho-ho-ho-ho-hoh!