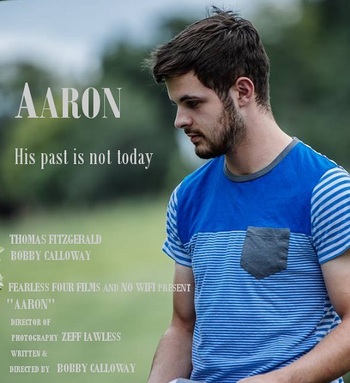 Pictured - not actually Aaron.
Adam: "Why'd you leave? Why here? You picked somewhere really far away."
Chris: "I don't know. Had to get away I guess. Just get out. Probably seems really stupid now..."
Advertisement:

is a 2017 Irish short film concerning a troubled relationship between two brothers.

Adam Chester (Thomas Fitzgerald) is introduced on the phone with his girlfriend Arianna, having just flown into England from Ireland. He's here to see his half-brother Chris Barry (Bobby Calloway). Things appear to be very tense and distant between the brothers - which is odd because a picture on Adam's phone from a few years back shows them looking very close. After a few moments of awkward small talk, Adam goes out to walk around the area.

Chris receives a distressed phonecall from their mother while Adam is out - and discovers that Adam actually left without telling them. This proves to be something of a last straw for Chris, who reads Adam the riot act as soon as he returns. But the reasons Adam came to visit are less black and white than they appear.

The film was released here