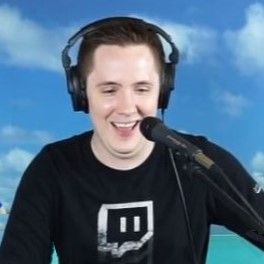 That face when Megan is about to be played.
Advertisement:

who specializes in performing live, high-energy drum covers of miscellaneous video game songs (and the occasional meme song). He also does the occasional gaming stream as a variety channel, covering both recent games such as Tetris 99, Fall Guys, Guilty Gear -STRIVE- and Super Smash Bros. Ultimate as well as retro games such as Super Mario 64 and Super Mario World. He recently as of April 2022 revealed his "8-Bit Bunny" Vtuber Avatar for his gaming streams.

In addition, Jerod joins ProtonJon, Tom Fawkes, and Stephen Georg on the Disc Only Podcast, airing on Jon's channel.