I Am Not Shazam 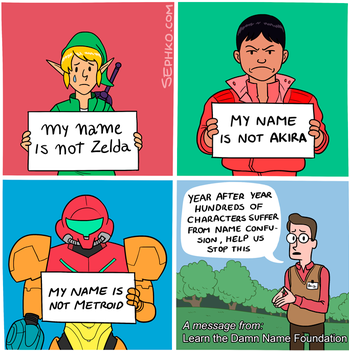 Used with permission.
"Frankenstein was the creator, not the monster. It's a common misconception held by all truly stupid people."
— Kryten, Red Dwarf
Advertisement:

A form of unintentional title confusion that occurs when a story's naming conventions confuse the audience about what the characters' names are, or who certain titles refer to. Most frequently, people will assume that the title of the work is the name of the main character.

This confusion is especially likely when one actor's name is billed alone above a title that sounds like it might be the name of his character, when it actually refers to, say, his racehorse.

Can lead to things like Cowboy BeBop at His Computer when people don't do research on the subject. Depending on the circumstances, it may also become a Fandom-Enraging Misconception. Not to be confused with I Am Not Spock, though it would be funny. Refrain from Assuming sometimes is related to this.

Subtrope of "Common Knowledge" and Viewer Name Confusion. Contrast Iconic Character, Forgotten Title and Protagonist Title Fallacy. See also Refrain from Assuming and Brand Name Takeover. Not to be confused with I Am Not Weasel, which is about species confusion rather than naming confusion.

The Annoying Orange annoys Link from The Legend of Zelda by calling him "Zelda".

Alternative Title(s): Blondie Is A Band, My Name Is Not Shazam, The Monster Is Not Frankenstein

The Annoying Orange annoys Link from The Legend of Zelda by calling him "Zelda".