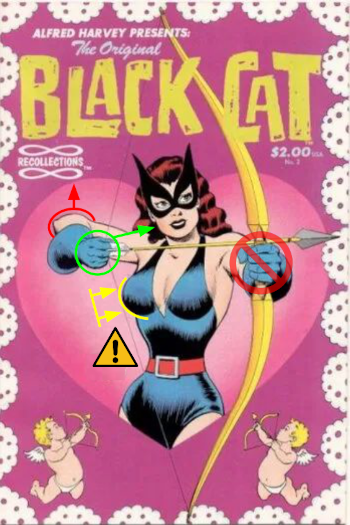 Katniss always pulls back her bowstring a good 10-15 seconds before she shoots. Now, I'm no expert on archery, but even I know this means either A): Katniss has muscles of pure titanium [...] or B): the draw weight on all of her bows has been so laughable her arrows should've been bouncing off anyone wearing thick clothing!
— Dominic Noble, on The Hunger Games

Most writers, unsurprisingly, are not practiced archers, and the pastime is rare enough in the modern day that consultants are not always easy to find. Add on 100+ years of Hollywood doing what it likes with any subject matter, and certain errors have become compounded to the point of being commonplace. Many of these are the result of ignorant creators assuming that familiar Guns and Gunplay Tropes can simply happen in exactly the same way with bows. Modern depictions, aided by CGI that is not tied to the real world in any way, often misrepresent both the best practices of archery and the physics involved.

Common mistakes (or bouts of artistic license) include:

Errors or artistic licenses that have their own tropes:

See also Bows Versus Crossbows, a trope examining the differences between these two common weapons, and which often involves errors as a result. Compare Guns Do Not Work That Way.