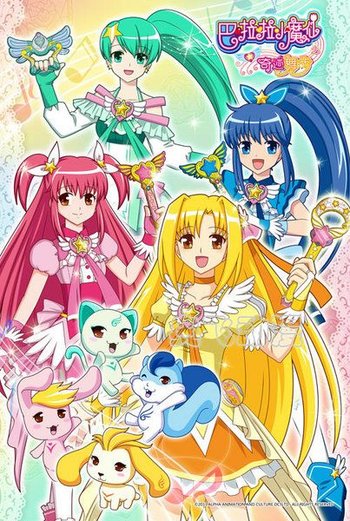 China's Magical Girl Show
If you want to see China's version of the Magical Girl genre, then you have Balala the Fairies (Simplified Chinese: 巴啦啦小魔仙). The first season of the series was a live-action show, which is common in China and not so for the genre. Most of the seasons are animated, however. It‘s much like their form of Pretty Cure.
Advertisement:

Outside of the human world, there is a magical world where human fairies are capable of using magic, ruled by the powerful Fairy Queen. However, there's also the presence of dark magic, which is forbidden from study or use. Luna, a fairy imprisoned for such research, escapes from her cell and steals a Power Crystal unguarded from the queen's throne room. Despite predicting such an incident would happen, the queen tries the fairy guardian of the stone Xiao Lan (Shirley/Sally in English) who was absent from her duties at the time. As punishment, she is sealed within a magical box and sent to the human world, not able to return until the stone is returned and Luna captured.

The magical box falls into the hands of two sisters, the underachiever Mei Qi/Maggie and the Teen Genius Mei Xue/Michelle, after it scares the owner of the shop where it was found. Xiao Lan emerges from the box and tells them of her mission, disguised as a babysitter so she can train the girls to become magic users themselves. But they encounter Lili, a jealous classmate who rivals the sisters and becomes the pupil of the Big Bad in her campaign to cause havoc.

Currently has seven seasons, five of which are animated. The first animated series featured a fourth main character, Xiao Qian/Sandy, who was replaced with Bei Bei/Emma in the second animated season. The live-action show consists of 52 episodes, first animated season has 36 episodes. And as of Over the Rainbow, they have gone the way of Pretty Cure and made a new set of girls every season, rather than reusing the same characters.

A series of films were also released, starting their release in January 2013.