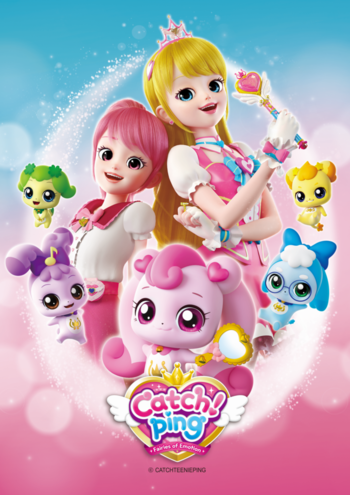 Catch! Teenieping (Korean: 캐치! 티니핑), or Catch! Teenieping: Fairies of Emotion in the West, is a South Korean Magical Girl series based on the toyline of the same name. It is produced by SAMG Animation (Miraculous Ladybug, Miniforce).

Teenieping are mischievous mind fairies who love to "enter" people's minds, but their playful nature and magical powers can wreak havoc in their hosts' lives. After an unknown force led her to a mysterious secret room in the castle holding a magic cube, the Teenieping are accidentally set loose on Earth, so Princess Romi of the Emotion Kingdom follows them to Earth to catch them back all again. Now living a life as a seemingly ordinary girl, she must balance her life between collecting all the Teenieping and her new life in the town of Harmony.