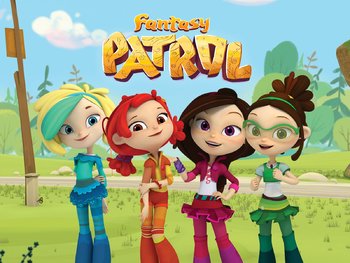 Myshkinnote Fableton in the English version is a very mysterious city filled with many Fairy Tale heroes and unusual miracles, but the ordinary residents of the city are unsuspecting of its true nature. Three young girls who also appear to be ordinary, but are actually young sorceresses; Valery, Mary, and Snowy move to Myshkin where they meet Helena, a local city girl. The girls soon befriend her and form a superhero team called the Fantasy Patrol. Their task is to observe the odd behavior of any fairy tale characters that roam the city and help them with their problems, while also protecting the ordinary side of the city from any harm, maintaining a balance between both worlds.

Fantasy Patrol (Russian: Сказочный патруль) is a Russian All-CGI Magical Girl web cartoon created by Vadim Volya and Evgeniy Golovin. Produced by Studio Parovoz, it premiered on the multi-series newsreel, Moolt in Cinema on April 30, 2016, and the first episode was then released on their YouTube channel on May 19, 2016.

Season 2 premiered February 16, 2019. In South Africa, the series airs on eToonz. The first season in English is fully available on iTunes, and all of the English episodes are slowly being released on Moolt Kids' YouTube channel.

A Spin-Off series, Fantasy Patrol: The Chronicles premiered on August 2, 2019. A film loosely based on the series, Koshchey: The True Story is in production, planned to be released in theaters in 2020.

The opening theme to the first season of Fantasy Patrol has no lyrics, besides a lot of la la la's.

The opening theme to the first season of Fantasy Patrol has no lyrics, besides a lot of la la la's.