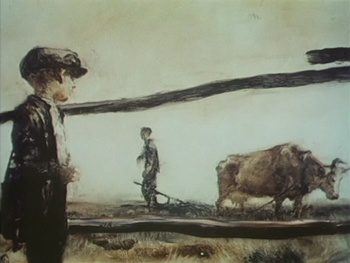 The Cow (корова) is a 1989 animated short film (ten minutes) from the Soviet Union, directed by Alexsandr Petrov.

Somewhere on the vast Russian steppe there lives a farm family, consisting of a father and a mother and their little boy. The boy is particularly fond of the family cow, which provides them with milk and also pulls a plow in their field. When the cow gives birth to a calf the boy takes a special liking to the calf as well. However, these relationships are disturbed when the family has to sell the calf.

First of several Oscar-nominated films for Petrov, who uses a distinct paint-on-glass style of animation.

It can be watched here.