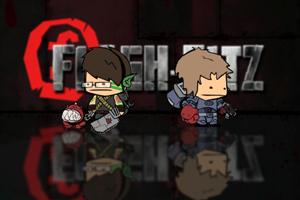 Flash-Gitz Animation is a team of two animators, Tom Hinchcliffe and Don Greger, who create animations (and also a webcomic called "Regular Marine") spoofing the Warhammer 40,000 universe. Their first video was a spoof of Space Hulk's third edition, which was originally posted on Newgrounds.