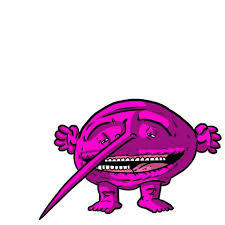 is an online animator who draws morbid cartoons often as parodies for different shows. His animations can be best summed up as surreal, horrific, and darkly humorous, making for a uniquely interesting animator who twists childhood icons into bizarrely compelling videos.

He also has a soothing, yet unnerving voice that he uses to great effect in his videos.

Recently, he has begun production on a crowd-funded original series called Monster Lab, detailing a mad scientist and his one-eyed assistant living in suburbia.

Nick CEO: Gentlemen, thank you for coming in today. This meeting shouldn't take too long.
Spongebob (in-character): We're happy to come in.
Nick CEO: Lose the act SpongeBob, I don't need you in character for this.
Spongebob (out of character): Well then what's the problem?
Interviewer: Michael

, what did you just say?
Michael Jackson: I SAID THE BOY'S SOUL IS MINE!!