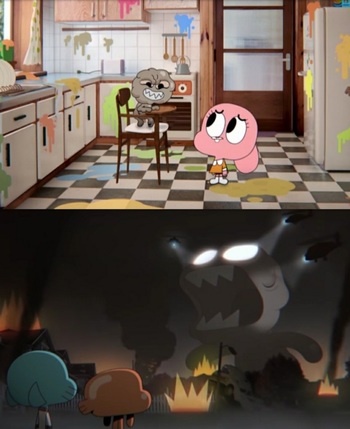 Lucky you, you just bought a new pet at The Little Shop That Wasn't There Yesterday. But you'd better be sure that you read the care-of manual very carefully. Odds are there is one thing that your pet should never under any circumstances get its hands on, otherwise it'll start growing... and growing... and growing, until it's a 50-Foot Whatever. Before you know it, the military will be shooting at your pet, unaware that all it needs is some Applied Phlebotinum to get back to normal.

This may be a natural part of the creature's biology, or it could be the creature became exposed to Green Rocks.

When a villain does this deliberately, it's Make My Monster Grow.