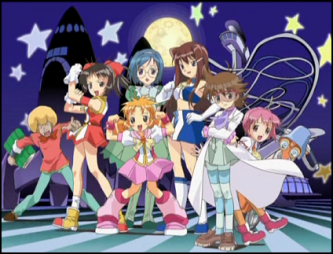 A 12-episode Comedy Anime about a group of singers shooting for the moon, literally. Michael Hanagata, manager of Mix Juice, an Idol group trying to make it big, strikes a deal with Teen Genius Susumu Tsukumo, who believes that man has never actually landed on the moon. He plans to change all that with his eco-friendly experiments, using Mix Juice as his pilots. Once on the moon, Mix Juice will give a concert, a publicity stunt that will rocket the girls to stardom! Or that's the plan, anyway. More often than not, Susumu's experiments (dubbed "Wandabas") end up being derailed by a minor detail, when the girls don't cause them to fail with their squabbling.

Things get messy in the second half, when Susumu's mother arrives on the scene and challenges her son to see which of them can get to the moon first.