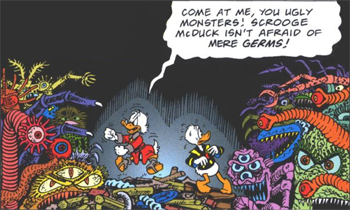 And that was the last time they let Scrooge into Lee's Palace.

Diseases are scary. However, germs are rather small. This leads to a bit of a problem. You see, scary things can make good villains, but you need to be able to see them.

This has led to writers coming up with two different but functionally similar solutions to this problem. Either have the microbe get really really big or have the hero get really really small. This runs almost entirely on Artistic License – Biology and the most extreme form of Square-Cube Law.

In many cases, the wee beasties aren't disease germs, but simply single-celled organisms; favorites are amoebae and paramecia. In other cases, they're normal parts of the human body; antibodies, or blood cells.

Some varieties of Mega-Microbes can overlap with the Blob Monster. More often than not, they will be portrayed as Monstrous Germs with eyes, jaws, pincers or tentacles.