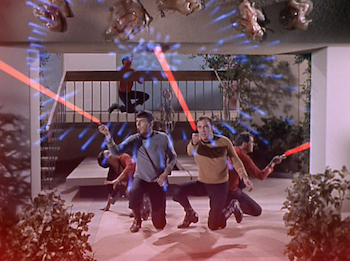 For many years, a strange epidemic of insanity has slowly but surely made its way through an interplanetary system and the planet Deneva is right in the path. The Enterprise tries to contact a Denevan ship that seems intent on flying straight into the sun. The only broadcast they're able to get from the ship is the eerie chant of "Free! I'm free at last!" before the entire ship and its pilot disintegrates in the radiation of the sun.

Kirk, McCoy, Bones, Scotty and a trio of Redshirts (who miraculously survive the experience!) beam down to Deneva to find the streets nearly empty. They are forced to stun a small but nonetheless angry mob. They find that everyone here is either dead or half crazy. They visit the home of Kirk's brother, Sam. Sam is dead, his son is unconscious and his wife is screaming mad while trying to block up an air vent. It is soon learned that Deneva has been invaded by bat sized, unicellular creatures. While the Redshirts are spared their usual abuse, Spock is on the receiving end of an alien attack.

On board the ship, Kirk's sister-in-law dies screaming in pain and ranting madly. Spock is in pain so intense even his Vulcan mental training can't dampen it. Kirk and McCoy try desperately to find a way to kill these creatures.