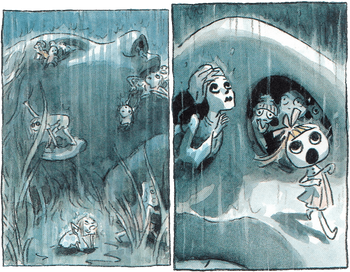 "From Ymir's flesh the world was made,
and from his blood, the sea,
mountains from his bones, trees from his hair,
and from his skull, the sky."
— Grímnir, "Grimnir's Sayings", Poetic Edda
Advertisement:

Land made out of a huge corpse. The dead body of a creature or giant so immense, people can live, grow crops, and build houses on it. Sometimes it will be a literal, fleshy corpse, while other times its remnants will be transformed after death into more familiar substances such as stone and soil. Or maybe it consisted of those substances to begin with.

While these worlds are usually the regular, inert sort of dead, you may occasionally find undead corpse worlds, which can cross over with tropes such as Genius Loci and are more likely to be treated as inherently horrible places than other examples of this trope.

This trope is Older Than Dirt as numerous mythologies thought the world was made from the corpse of some primal god or monster.

A landscape made of just the skeleton would probably be a Monster-Shaped Mountain — a stone mountain either shaped like a creature or made out of a creature. Typically a far less squicky variety.

For the still-living version, see Genius Loci, Turtle Island, Undead Abomination, or Womb Level. See also Ribcage Ridge, which may overlap with this trope if the ridge is sufficiently big and inhabited. They may occasionally involve Body Horror and Squick. Not the same as Corpse Land, a land full of corpses.