More Hypnotizable Than He Thinks 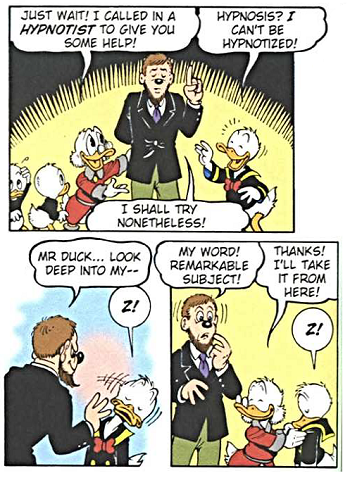 "Apparently they have power over the phenomenally weak-minded."
"But I haven't even hypnotized him yet! I just said the word 'Chicken!'"
— Stage Hypnotist in regards to Dick Daring, The Replacements
Advertisement:

Alice has the power to (or has acquired a device that can) hypnotize a person, and she wants to try it out on Bob. Bob merely scoffs at this, saying that he cannot be hypnotized. However, Alice tries anyway, and ends up successfully hypnotizing Bob.

If the character snaps out of hypnosis, expect him or her to say something along the lines of, "See? I told you I can't be hypnotized!"

Distantly related to Tempting Fate. See also Unpaused. A form of Irony. This is very much Truth in Television — trance is a state of consciousness that people enter and leave many times a day, so someone can be hypnotized and not recognize it, largely because the memory blackout and loss of free will are complete myth. Though if they know someone is trying to hypnotize them it won't work if they don't want it, all they need to do is not focus on whatever the hypnotist wants them to focus on.

Mr. Crocker brags about having immunity to hypnosis, but him falling asleep proves otherwise.

Mr. Crocker brags about having immunity to hypnosis, but him falling asleep proves otherwise.