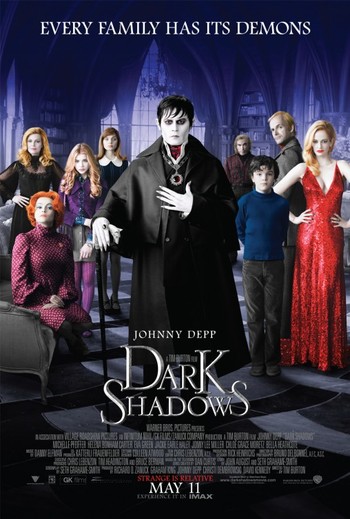 The vampire is the most normal one in this family.
"It is said that blood is thicker than water. It is what defines us... binds us... curses us."
— Barnabas Collins
Advertisement:

In 1776 Barnabas, the scion of a wealthy Maine fishing family, is turned into a vampire by Angelique (Green), a witch, for rejecting her love. He is locked in an iron coffin and buried alive. He escapes two centuries later, in the early seventies, and goes to help out his declining family's descendants and confront Angelique once more.

Released in the summer of 2012, the film is more comedic in tone than the series, similar to early Burton films such as Beetlejuice.