Film / Curse of the Crimson Altar 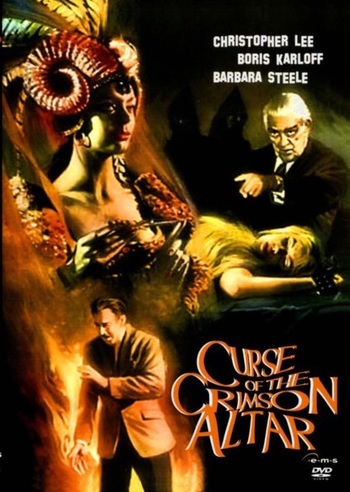 Curse of the Crimson Altar (a.k.a. The Crimson Cult) is a 1968 British horror film directed by Vernon Sewell and starring Christopher Lee, Boris Karloff, Barbara Steele and Mark Eden.

When his brother disappears, Robert Manning pays a visit to the remote country house he was last heard from. While his host is outwardly welcoming - and his niece more demonstrably so - Manning detects a feeling of menace in the air with the legend of Lavinia Morley, Black Witch of Greymarsh, hanging over everything.

Based on The Dreams in the Witch House by H. P. Lovecraft.

Curse of the Crimson Altar contains examples of: