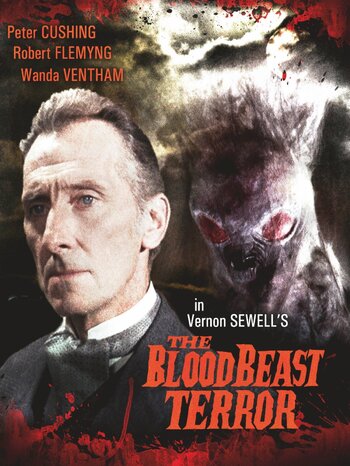 The Blood Lust of a FRENZIED VAMPIRE!
Advertisement:

The Blood Beast Terror is a 1968 British Sci-Fi Horror film from Tigon British Film Productions, directed by Vernon Sewell and starring Peter Cushing. It concerns a series of murders committed by a weremoth (played by Wanda Ventham, the real-life mother of Benedict Cumberbatch).

Cushing once said this was probably the worst movie he had ever done, although that didn't stop him from turning in a good performance. The man was a pro.

Not to be confused with Night of the Blood Beast.