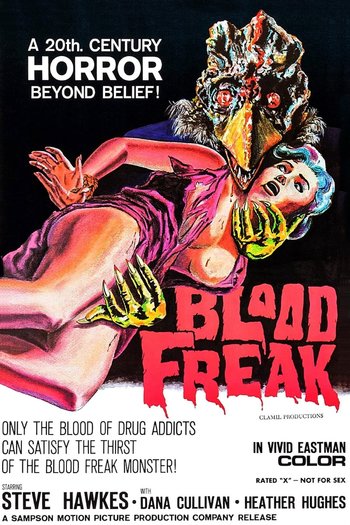 Blood Freak is a 1972 American horror film directed by Brad F. Ginter and starring Steve Hawkes, Dana Cullivan, Heather Hughes, and Bob Currier. The plot concerns a Vietnam War veteran named Herschel (Hawkes) who is introduced to marijuana by a young woman named Angel (Hughes), before finding work as a taste tester at a local turkey farm where scientists are treating the meat with experimental hormones. The hormones in the meat react with the drugs in Herschel's bloodstream to transform him into a vampiric bird-man feeding on the blood of drug addicts.