Film / Night of the Blood Beast 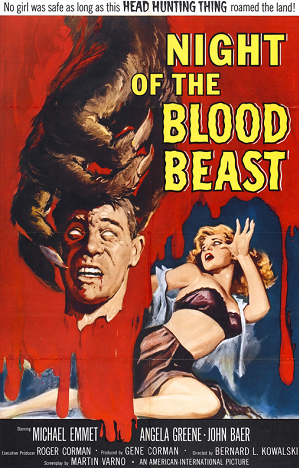 Night of the Blood Beast is a 1950s sci-fi B-Movie produced by Roger Corman (and his brother, Gene).

An outer space mission goes disastrously wrong as the solo astronaut returning to Earth has a malfunction on reentry. Curiously, the plummeting ship lands fairly intact, horizontally in a cornfield, and the astronaut's body is relatively intact (and is indeed still alive).

It turns out that the reason he's still alive is that an alien has commandeered his body to act as a surrogate mother, and has impregnated him with numerous shrimp-like alien babies.

The other problem is that the alien apparently hitched a ride with him, and is trying to prevent the humans from calling for help until the big plan comes to fruition. It's up to this team, isolated from the outside world, to save the day and thwart the impending alien investigation.

Not to be confused with The Blood Beast Terror.

Night of the Blood Beast contains the following tropes: