Film / Night of the Comet 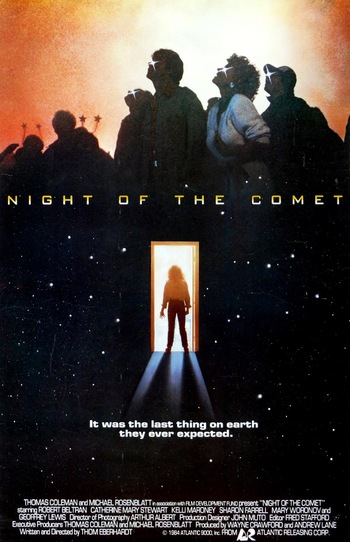 The comet's coming, and the world will never be the same.
"In 1910, Halley's Comet Returned. Everyone thought they were going to die then."
—Party Guest
Advertisement:

Night of the Comet is a 1984 film directed by Thom Eberhardt and starring Catherine Mary Stewart, Robert Beltran, and Kelli Maroney. It has elements of such diverse genres as science fiction, horror, zombie apocalypse, comedy, and romance.

The plot centers around The Earth passing through the tail of a rogue comet — an event which has not occurred in 65 million years, the last time coinciding with the extinction event that wiped out the dinosaurs. On the night of the comet's impending mid-December passage, large crowds gather to celebrate the event. The next morning, a reddish haze covers everything, and there are no people, animals or other signs of life, only small piles of red dust and empty clothes where people stood and watched the comet's passage. The people who "survived" are either dying, or turning into flesh eating zombies. Siblings Samantha and Regina Belmont are the film's protagonists.

Despite the schlocky opening scenes, the movie seems to be an attempt at a Deconstruction of typical thriller movies of the era, in that both leads are capable Action Girls rather than just monster bait (in fact, another Californian blonde who fought the undead in the next decade bears suspicious similarities to them), the lead male is Hispanic, bridge-dropping is played with, and so on.

Not to be confused with Year Of The Comet