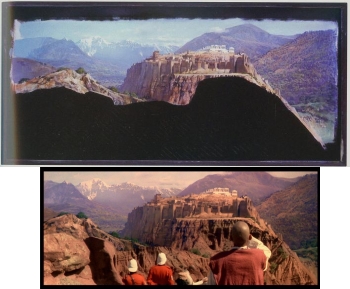 "Bye, Dorothy! Be careful not to run into that painted background that's ten feet away!"
— CinemaSins, Everything Wrong With The Wizard of Oz
Advertisement:

A shot in which only a part of the shot, usually the area immediately surrounding any of the characters present on-screen, is a live action shot. The rest is a painting, most often used to portray a non-existent vista. Rather than build a vast set, they shoot the actors on a plain set with a few background elements, with parts of the camera frame matted off by opaque cards. Later, an opposite set of cards, matting the parts of the frame that were already exposed, is used to shoot the background; in most cases this is a detailed, realistic "matte painting" done in acrylics on glass by a dedicated artist, but it could also be miniatures or location footage. Low-budget films, and films where whatever was in front of the matte was hoped to be distracting, sometimes used paintings on canvas.

With the advent of high-definition television, matte paintings can fall into Special Effect Failure territory: peer closely at any long shot that lasts more than a few seconds where the main action is going on in the foreground, and the background will very likely be a matte painting.

In the electronic editing era, the matte shot is often used to refer to a Chroma Key shot, which uses a similar principle. This system has replaced any number of early film tricks. Classic Matte Shots had one advantage over Chroma Key, though: you could matte anything of any color equally well (or badly).

The opposite of GIS Syndrome (real background, drawn foreground).