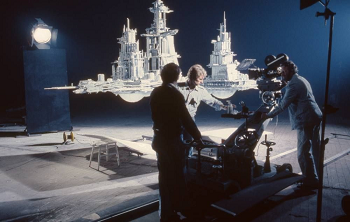 It's only a model. (Shhh!)
Advertisement:

Miniature Effects are Exactly What It Says on the Tin - film effects achieved by the use of miniatures. They are technically a blend of In Camera and Practical Effects, but a lot of time they're given their own listing in the credits since they often require specialists and staff focusing on just building the miniatures. It's not just a case of making smaller size objects (although that can be quite hard depending on how much the camera is going to have to focus on them). Smaller sized objects will have different textures, they take stress and strain differently, the camera perspective and focusing works differently, objects don't fall at the proper rate, fluids and explosions behave differently and the material the large scale object may be made out of may not be suitable for the small scale so a suitable visual approximation must be found.

Minatures can be used to replace large buildings and manmade objects in backgrounds, often combined with a matte background. They can also be used to simulate the explosion of large (and thus expensive) objects like planes and bridges.

Before CGI, spaceships were just miniatures on a black screen with christmas lights, after CGI... well for sometime they remained miniatures but on a blue screen.

A Sub-Trope of Only a Model. If they're unmodified toys and/or box stock model kits, that's Off-the-Shelf FX. See also Prop.