Driving into a Truck 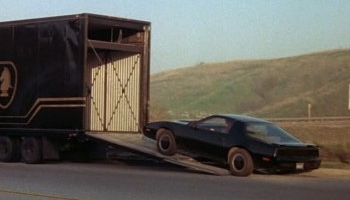 The spy car needs to evade his pursuers, and/or make a pit stop while on the run. What to do?
Advertisement:

Why, drive up into the back of a conveniently waiting semi, of course! Then you can sneak past your pursuers, Right Under Their Noses! Often the truck trailer will contain a complete auto shop. Sometimes a bus, airplane or other large vehicle will be used instead.

When the truck is moving, the main difficulty of course is the speed difference between the truck's ramp and the road. The Mythbusters, once again, have shown that this is possible, even demonstrating the trope with a car and a truck. SCIENCE! This is due to the fact that while there is indeed a big difference to the speeding tires from the transition of passing road to static truck, the car's overall inertia is enough to overcome this and decelerates the tires. In this case, only the speed of the overall mass of the car matters, relative to the truck; the wheel speed is irrelevant. Still, it goes without saying that this is not something you should try at home. Even if it is completely possible, it is still a risky and highly dangerous manuver, one that should be left to professional drivers. On top of this is the risk that you can do some major damage to your car's engine and transmission if it is not properly strengthened.

Common to spy shows. When the truck is trying to force you to drive into it (or is driving into you), see Mega-Maw Maneuver. Marginally related to Punk in the Trunk (in the sense of stowing away in another vehicle). Not to be confused with simply plowing into one and crashing your car.