Film / The League of Gentlemen 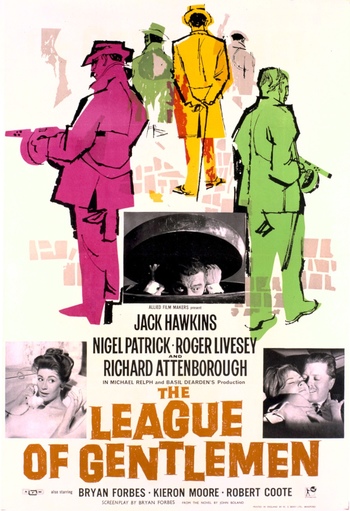 A classic British crime comedy, directed by Basil Dearden and released in 1960.

Involuntarily-retired Lieutenant-Colonel Hyde recruits seven other dissatisfied ex-servicemen for a special project. Each of the men has a skeleton in the cupboard, is short of money, and is a service-trained expert in his field. The job is a bank robbery, and military discipline and planning are imposed by Hyde and second-in-command Race on the team, although civilian irritations do start getting in the way.

This film introduced a lot of the tropes now common to The Caper and the Impossible Mission. Not to be confused with The League of Extraordinary Gentlemen or The League of Gentlemen, although the titles of both reference this film.