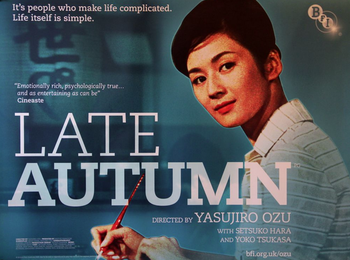 Late Autumn is a 1960 film from Japan, directed by Yasujiro Ozu.

Akiko Miwa (Setsuko Hara) is a middle-aged widow with a 24-year-old daughter, Ayako. At a memorial service for her late husband Mr. Miwa, three of Mr. Miwa's old college buddies—Taguchi, Hirayama, and Mamiya—drink sake and reminisce. The conversation turns to the two women, as the three men, all of whom wooed Akiko years ago before Miwa won her, remark admiringly how attractive she still is in middle age. From there the discussion goes to the daughter, as the three men note how odd it is that Ayako still lives with her mother and hasn't married yet. They resolve to match her up. Eventually they realize that Ayako is reluctant to leave her mother living alone, so they resolve to marry her off as well. And who better to marry Akiko than one of them, namely Mr. Hirayama, himself a widower?

None of the three men stop to consider that they're sticking their noses into someone else's business. Neither do they consider whether or not Ayako wants to get married; as it happens she doesn't, preferring to stay home and take care of her mom. And while Akiko is willing to let her daughter go off on her own, she also has no interest in getting married.

Based on the book of the same name by Ton Satomi, and bears similarity Ozu's earlier 1949 film, Late Spring, which also starred Setsuko Hara.