They Call Me MISTER Tibbs! 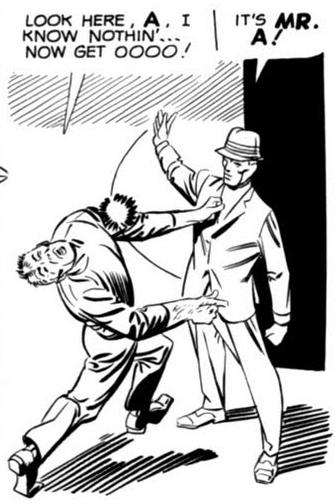 Bitchslap!
"Moving parts in rubbing contact require lubrication to avoid excessive wear. Honorifics and formal politeness provide lubrication where people rub together. Often the very young, the untraveled, the naïve, the unsophisticated deplore these formalities as 'empty,' 'meaningless,' or 'dishonest,' and scorn to use them. No matter how pure their motives, they thereby throw sand into machinery that does not work too well at best."
— Robert A. Heinlein
Advertisement:

The way you address someone says a lot about how you think about them, and what your relationship is. Just think how this can be a potential minefield, especially when meeting someone new; if someone makes a mistake, it usually takes one of two forms:

The trope is named for Sidney Poitier's famous line from In the Heat of the Night, where a black Philadelphia detective, Virgil Tibbs, is in a bigoted part of the South and is asked what people call him, using a racial slur in the process. Mister Tibbs responds with affirmation of his experience and value. This is also a downplayed example of Beam Me Up, Scotty!, as Poitier gives an even inflection

across the sentence, rather than emphasizing "mister", indicating he's retaining control and demanding respect rather than giving into anger (a staple feature of Poitier's career being that his characters had to be better than the best for the audience to accept him as an equal of white characters).

Note that this happens in real life, making it an example of Truth in Television; however, it is also typically notable in media set in and from previous periods (such as most Jane Austen works). Compare First-Name Basis, Full-Name Basis, Last-Name Basis, and Do Not Call Me "Paul"; contrast The Magnificent; and compare/contrast Terms of Endangerment. If this is a Running Gag, then it becomes Insistent Terminology and possibly a Large Ham Title. See also Friendly Address Privileges.