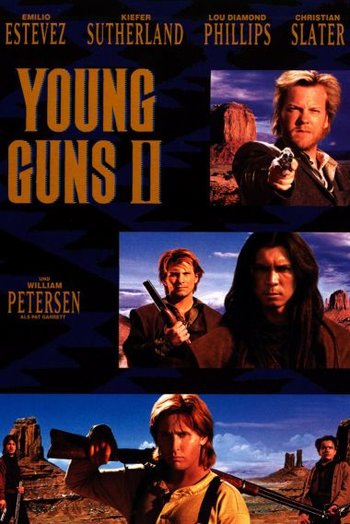 In 1950, an old man meets with lawyer and tells him that he is "Brushy" Bill Roberts (Emilio Estevez), but that his past alias was... Billy The Kid. When questioned, Bill tells the lawyer that he wants to receive a pardon from the Governor of New Mexico, and begins to relate a tale of his past exploits...

In 1881, the Regulators have gone their separate ways, but "Doc" Spurlock (Kiefer Sutherland) and Jose Chavez (Lou Diamond Phillips) are captured by law enforcement and set to be executed. Billy springs back into action to rescue them before the trio head south to Mexico. Just after they escape, John Chisum (James Coburn), a local Cattle Baron who was wronged by the group, pays one of Billy's former partners, Pat Garrett (William Petersen), to hunt and kill him, setting off an explosive series of confrontations.

The film received mixed reviews and middling box office at release, but generated a profit on home video and received a better reception in later years, generating enough interest to result in a release of Alan Silvestri's complete score for the film in 2011.