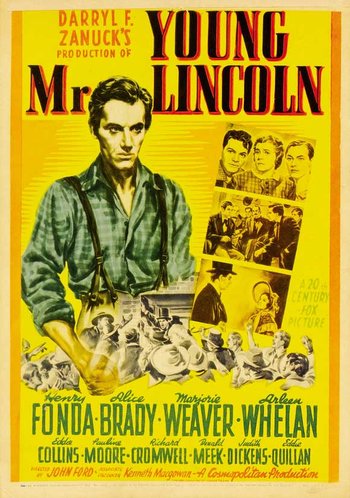 Young Mr. Lincoln is a 1939 American historical drama film directed by John Ford and starring Henry Fonda as, you guessed it, Abraham Lincoln.

Not precisely a biopic, the film offers a fictionalized depiction of the early adulthood of the future U.S. President, a period extending from roughly 1832 to 1837. It follows Lincoln's career as a rural Illinois shopkeeper and aspiring politician, his decision to study law, and the beginnings of his law practice in Springfield, where a challenging murder case soon provides the inexperienced lawyer with a chance to make a name for himself.

Compare Abe Lincoln in Illinois, a 1940 film adapted from a 1938 stage play that tells basically the same story, and Steven Spielberg's 2012 film Lincoln, which was viewed by its screenwriter Tony Kushner as a Spiritual Successor to this film.