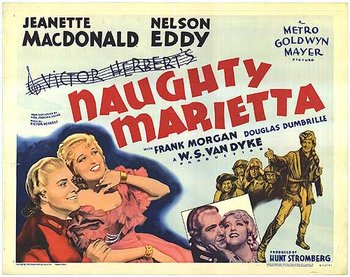 Naughty Marietta is an operetta with music by Victor Herbert and libretto by Rida Johnson Young. It opened in October 1910 in Syracuse, New York, and was the Trope Codifier for American operettas.

The story is set in 1780 New Orleans, and focuses on American Captain Dick Warrington's attempt to capture the notorious pirate Bras Pique, as well as his developing relationship with the beautiful and spirited Neapolitan Countess Marietta D'Altena, who's come to New Orleans as a casquette girl to escape an Arranged Marriage and to find the man who can complete her Dream Melody, as that's who it's foretold she'll marry. There's also romantic tension between Lizette, another casquette girl, and Silas, Captain Dick's and later French Lieutenant-Governor Grandet's servant (called Simon in the original premiere, then changed to Silas in other versions).

In 1935 Naughty Marietta was loosely adapted into a film directed by Robert Z. Leonard, starring Jeanette MacDonald as Marietta and Nelson Eddy as Warrington. It was the first of eight musical films that co-starred MacDonald and Eddy. The film took many liberties with the plot of the operetta, including changing Marietta into a French princess named Marie, and eliminating the characters of Lizette, Simon/Silas, and Etienne in order to concentrate on the Marie-Warrington romance. Forty years later, MacDonald's performance of "Ah! Sweet Mystery of Life" was memorably sampled in Young Frankenstein.