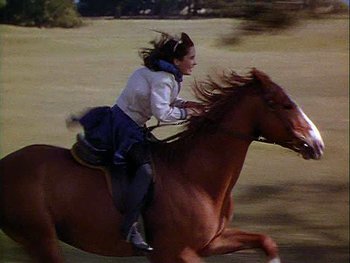 The story begins with Velvet Brown, a neurotic 14-year-old girl who wants nothing more than to own a stable full of horses. After her father's employee Mi, (son of her mother's former swim coach) makes an offhand remark that a local piebald horse could win the Grand National (a real life horse endurance race), Velvet goes from obsessing over her collection of paper horses to wanting to win the horse in a raffle and train it. Once Piebald (King in the TV series) is hers, she and Mi become serious about racing. Velvet uses a fake name to compete, disguising herself as a boy, and when her true gender is discovered, she becomes a national sensation for reasons besides the racing.

In the film, Velvet was played by Elizabeth Taylor, in her Star-Making Role. Also in the cast were Mickey Rooney as Mi, Angela Lansbury as Velvet's older sister Edwina, and Anne Revere (who won an Academy Award for Best Supporting Actress) and Donald Crisp as their parents. It was directed by Clarence Brown.

There was also a sequel to the movie released in 1978, called International Velvet and starring Tatum O'Neal in the title role.

Tropes related to the metaseries: