Film / Mutiny on the Bounty 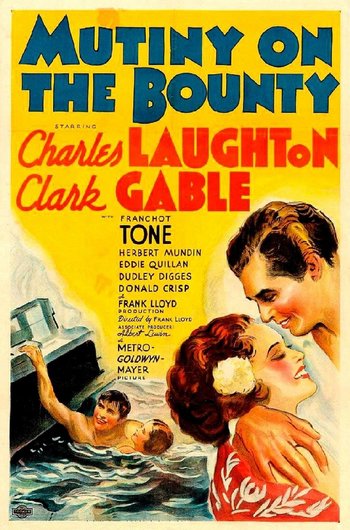 "Can you understand this, Mr. Byam? Discipline is the thing. A seaman's a seaman. A captain's a captain. And a midshipman, Sir Joseph or no Sir Joseph, is the lowest form of animal life in the British Navy..."
— Captain William Bligh
Advertisement:

Mutiny on the Bounty is a 1935 film telling the story of the famous mutiny aboard HMS Bounty.note This is a historical Beam Me Up, Scotty!—the Bounty was never designated HMS while in service. It was the HMAV Bounty, a Royal Armed Vessel. It was directed by Frank Lloyd and starred Clark Gable and Charles Laughton.

In 1789, the small British naval ship HMS Bounty is sent to Tahiti under the command of Lieutenant William Bligh (Laughton) with the mission of bringing breadfruit plants to the Caribbean. The crew spends five months in the South Pacific island paradise while the plants grow, and the British sailors become accustomed to the good life there, basking in the sun and enjoying the company of the friendly natives (especially the women).

When the time comes to leave, the men have a hard time readjusting to the "jack tar" life of a sailor, especially under the command of their sharp-tongued Lieutenant. A few weeks after setting sail, a mutiny breaks out with third-in-command Fletcher Christian (Gable) as the leader. Lieutenant Bligh is set adrift in an open launch with just over half the men and, in an impressive feat of seamanship, is able to navigate to the safety of Dutch-held Timor with only a sextant and a pocket watch.

The mutineers initially return to Tahiti. Some stay there, knowing they will be tried (and possibly executed) as soon as the next British ship arrives. 9 of the 22 mutineers (including Fletcher Christian), intending to evade capture, take the Bounty and head for the very isolated Pitcairn Island in the company of several Tahitian men and women. After reaching their goal and intending to start a new life, they burn the Bounty.

The film is an adaptation of a book called Mutiny on the Bounty, the first book in The Bounty Trilogy, a series of novels by Charles Nordhoff and James Norman Hall.

Tropes in Mutiny on the Bounty include: