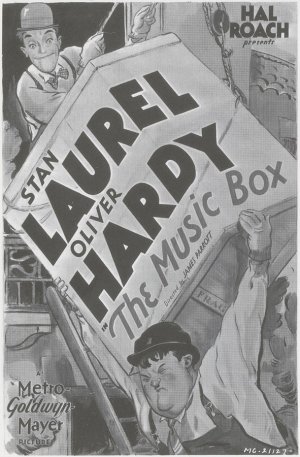 The Music Box is a 1932 Laurel and Hardy short film directed by James Parrott, produced by Hal Roach Studios and released by Metro-Goldwyn-Mayer. Regarded by many as the best film the duo ever made, it was the winner of the first Academy Award for Best Short Subject (Comedy) in 1932 and was selected by the Library of Congress for preservation in the U.S. National Film Registry in 1997.

The short itself depicts Stan Laurel and Oliver Hardy as delivery men attempting to carry a large, heavy player piano up a long flight of stairs, and failing spectacularly several times. Once they finally do get the piano up the stairs they have even more trouble getting it into the house they're delivering it to. And to top it all off, the recipient of the piano is someone Laurel and Hardy angered while bringing it up the long flight of stairs, and was unaware he was getting a piano because his wife bought it as a surprise. He is not thrilled to see Laurel and Hardy invading his home and making a nice mess of things.

The film can be watched here.