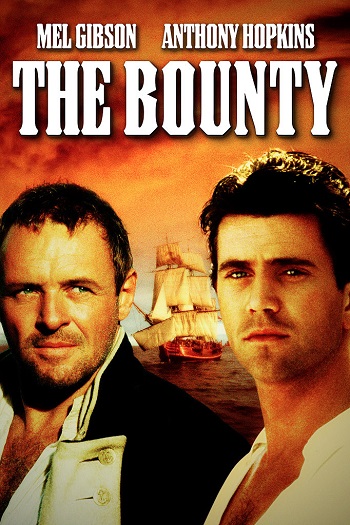 "They were friends through hell. They became enemies in Paradise."
— Tagline
Advertisement:

The Bounty is a 1984 film directed by Roger Donaldson.

It tells the story of the famous 1789 mutiny

on the British ship HMS Bounty, in which many sailors mutinied and cast their commanding officer Lieutenant William Bligh adrift on an open boat. Lt. Bligh and the men who were loyal to him (over half the crew) eventually made it to the Dutch colony on the island of Timor after a harrowing voyage across the ocean. The mutineers, led by first mate Fletcher Christian, made a home for themselves on Pitcairn Island in the south Pacific, where their descendants remain to this day.

The film stars Anthony Hopkins as Captain Bligh and Mel Gibson as head mutineer Fletcher Christian. It is also a notable case of Retroactive Recognition, since it features a young Liam Neeson as a mutinous sailor, a young Daniel Day-Lewis as the most obnoxious of Bligh's officers, Bernard Hill as another officer who remained loyal to Bligh, and a young Dexter Fletcher as another mutinous sailor. It also has Laurence Olivier as Admiral Hood, Edward Fox as Capt. Greetham (Hood and Greetham both being on the Navy's board of inquiry, in the Framing Device) and Wi Kuku Kaa as King Tinah. Vangelis composed the score.

This film was originally supposed to be a pair of films directed by David Lean for Dino De Laurentiis, but after a long production delay, Lean left the project and Donaldson directed.