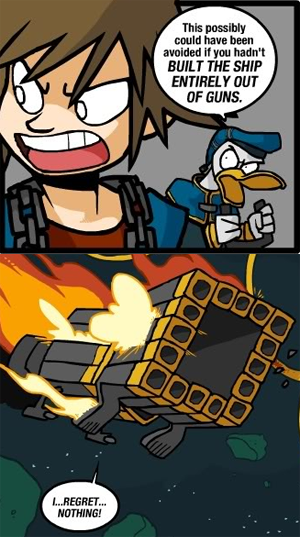 "But if you held down A you would get a giant cube of bullets! What's not to like!?"
Nana: [after Rasta screams in Akira's face] Really, Rasta?
Rasta: I regret nothing.
— MGT School
Advertisement:

A Stock Phrase used by characters about to or after having done some crazy action, especially if it could result in dying. Very frequently parodied.

One variation is for the character to state a regret other than what might be expected, for example:

Most of these (except the "regretting everything", obviously) may be part of a Defiant to the End posture. Any of them could be a "Facing the Bullets" One-Liner. Compare Worth It, I Did What I Had to Do. Can be said by The Unapologetic if he doesn't regret harming other characters.