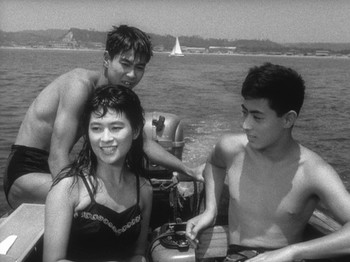 Crazed Fruit is a 1956 film from Japan directed by Ko Nakahira.

It's based on a novel by Shinto Ishihara.note Who went into politics, served in the legislature, and was governor of Tokyo for 13 years. Haruji and his older brother Natsuhira are idle young men of college age, who don't seem to study or have a job but are wealthy enough to have their own motorboat that they take out for joyrides in the harbor. While taking a train to the beach to go for a spin in their motorboat, they see an extremely good looking woman in a white dress. Haru especially is enchanted.

While zipping through the water in their boat they see the woman swimming. Her name is Eri. Shy, meek Haru summons up the courage to ask Eri to be his date to a party thrown by one of his rich buddies. Natsuhira is so attracted to Eri that he barely resists the temptation to ask her out himself. Eri and Haru leave the party and have a romantic evening kissing by the beach. Soon they are dating regularly—but Eri is strangely reluctant to tell Haru where she lives. Later, Natsuhira learns a secret about his brother's girlfriend, and uses it to his advantage.