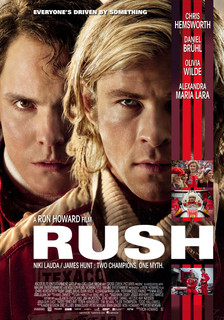 Egos clash at 200mph
"Asshole."
— James Hunt and Niki Lauda, about each other.
Advertisement:

Rush is a 2013 film directed by Ron Howard and starring Daniel Brühl and Chris Hemsworth. The film dramatizes the real-life Formula One rivalry of British playboy James Hunt and Austrian precision driver Niki Lauda, culminating in their 1976 duel for the world championship, which is widely considered the most dramatic year in motorsports history. The score was composed by Hans Zimmer and the script was penned by Peter Morgan. The real Niki Lauda acted as a consultant for both Peter Morgan and Daniel Brühl. The movie premiered in the UK on September 2nd and opened in the US on September 27th.