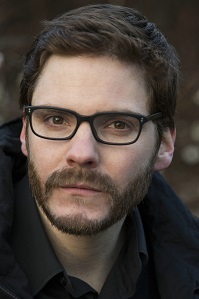 "Mackie-na! I am a big deal!"
Advertisement:

He began his career in Forbidden Love (a German Soap Opera) in 1995. Good Bye, Lenin! made him a household name in European cinema in 2003, and his role in Inglourious Basterds brought him to international attention, later cemented for his widely acclaimed role as Niki Lauda in Rush. He also played Helmut Zemo in the Marvel Cinematic Universe, starting in 2016 with Captain America: Civil War.

He can speak German and Spanish as a native, meaning he can play both nationalities with ease, and he's also fluent in English, French, Portuguese, and Catalan.