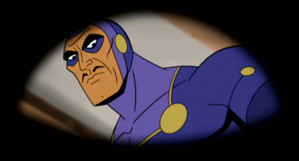 Similar to Mouth Cam, it's a framing device (curved at top and bottom) that looks like the camera is behind two big eyelids that open and close. It's usually used for comic effect, though it can also be used in more dramatic works, or works that are meant to show life from a character's point of view. The point-of-view character may be just waking up at the beginning of a scene, and between blinks they may see slightly different situations developing.

Compare Binocular Shot, where things are seen from the point of view of someone using binoculars rather than their naked eye.

Thomas is woken up by Sir Topham Hatt early in the morning.

Thomas is woken up by Sir Topham Hatt early in the morning.