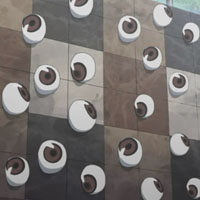 The Walls Have Eyes...
"The eyes are the window of the soul."
— Lorenzo di Medici
Advertisement:

Eyes aren't just for seeing- they can tell you a lot about the entity behind them as well.

Eyes and eye motifs are traditionally associated with the spiritual and the occult, connected to the idea of perceiving/seeing something beyond the ordinary. Unusual eyes are a common trait of mystical or alien beings from ancient myth to modern science fiction. Body Horror just wouldn't be the same without eyes (or lack thereof). In animated shows and drawn media, the eyes often dominate expressions, and even in live action they are one of an actor's most important tools for emoting.

The following are just a few examples of how much eyes can reveal about their owner. (And the Game Show Eye Guess has nothing to do with any of these tropes.)